This week, your baby measures over 16 inches long. He weighs about 3 1/3 pounds (about the size of a coconut) and is heading into a growth spurt. He can turn his head from side to side, and his arms, legs, and body are beginning to plump out as needed fat accumulates underneath his skin. He's probably moving a lot, too, so you may have trouble sleeping because your baby's kicks and somersaults keep you up. Take comfort: All this moving is a sign that your baby is active and healthy."babycenter.com 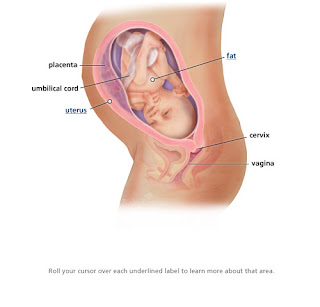 Friday the 13th was my Prenatal Check Up with my new Obstetrician. I know, 31 Weeks and yet a new OB! I'll be telling you why a little bit later. Alright so you know how the regular check up's go right? I'm not gonna go further on that instead I would wanna talk more about the Ultrasound result.

Let's start with the amniotic fluid that surrounds my unborn baby and allows her to to float and move is Adequate so nothing to be worried about. Because High level or also called Polyhydramnios and Low level or Oligohydramnios are considered abnormal signs and might be a sign of certain condition so a close monitoring by a health care provider is required.

Next, Baby's Fetal Heart tone is 159 bpm (beats per minute) which is normal.

At 31 Weeks my unborn baby is still on Breech presentation. Breech meaning buttocks or feet first as opposed to the normal head first or cephalic presentation. It's still early to be worried though because they will eventually turn on their own over the next 2 months. But comparing this to my 2 previous pregnancy as early as 2nd trimester both Kuya T and Baby A are already positioned head first. Well every pregnancy and baby develops differently. But because of my unborn baby's presentation it was kinda hard to determine the gender, but my OB first thought it was a baby girl but then told me that we can just repeat the ultrasound on my next visit just to be sure. Oh well, we were kinda hoping it to be a boy but whatever God provides we would be more than willing to accept.

Also I don't know what her basis are but my OB told me that my baby is a bit small but not to much of a concern but she just prescribed an additional vitamins.

Based on my LMP, Last Menstrual Period my Expected Date of Delivery is on November 15, 2013 but on the Ultrasound it's November 23, 2013. This is okay though.

We just discussed some important points then after the ultrasound we then scheduled my next visit which is going to be on September 27, 2013.

Okay, so let's now talk about me having a new Obstetrician. Actually it's already my 3rd time switching and hopefully the last. When we found out that I was pregnant I first had my Prenatal at Perpetual Help Medical Center until July. But as soon as we found out that it's gonna cost us around 40-50,000 to have our baby there, we decided to look somewhere else. Seriously that is quite expensive and not practical at all since it's only J who's working. But since we haven't stayed here in Las Pinas even for a year, we are really not familiar with the whereabouts. We don't know where else to go, but we know Las Pinas General Hospital because we would always pass by the said Hospital whenever we go to Baclaran. So we gave it a try. I had Kuya Tantan in a Government Hospital way back 2009 it was in my hometown La Union, though I had my own OB and I was in a private room. If only my OB in Perpetual is affiliated to a different Hospital we may have considered her but she's not so I have to find a new one. So I had my check up twice at LPGH until I decided to look somewhere else again for the following reasons.

First, since it's a Government Hospital there are a lot of patients. I have to be there early in the morning to get a number card. Then I together with the other patients would have to wait until 10 am, because that's the time that Doctors arrive. Imagine I was there 8 am and I got the 47 number card, I have to wait 2 hours for the Doctor and few more hours to be checked because my number card belongs to the last batch. For those 2 check up's I finished past 12 nn.

Second, in a clinic/room there are like 2-3 Doctors and 3 patients at the same time. And i don't like how some Doctors could be so rude, giving unsolicited comments about patients personal life with other people around. In this way confidentiality is already violated. Seriously I don't know how some Doctors who works in a Government/Public areas could be so mean. Is it because these patients don't pay for their service should they deserve to be treated less compared to those who are paying? During my College years when I was still a nursing student, I already had this observation. Reality check, even in the health care service there is inequality. If you have money then you will be getting better service if not, then you have to deal with the consequences. Isn't it sad?

Third, J's working night shift and goes home around 9-10am and by that time the Hospital is no longer giving out card numbers. The first time I had my check up there J's doesn't have work, then for the second time since it was already scheduled I have to be there early so my in laws took the kids to the office where they work and just had J picked them up. We can't do this every time naman, so time conflict talaga.

Good thing, there's a clinic just in front of the Hospital so last September 13th I went there for the first time, and that's where I will be having my Prenatal Check up from now on. But no, I am not having my baby there, not anymore after my bad experience when I gave birth to baby A in a lying in clinic in Manila. My new OB is affiliated to other Hospitals aside from the said clinic, so I have an option as to where I would wanna give birth. But almost all the Hospitals she is affiliated to are Private Hospitals so yes we need to pay, but we already discussed about it and it's way lesser compared to 50,000. Indeed "Money talks" big time! Come to think of it, better treatment from your OB, better Hospital facilities plus no mo waiting for long periods of time, hawak mo pa oras mo.I know we were trying to be practical and would wanna spend less if possible but there's really a conflict eh, so ipon ipon din pag may time.
at September 14, 2013
Email ThisBlogThis!Share to TwitterShare to FacebookShare to Pinterest
Labels: Guides and Tips