What's with Friday the 13th? Ever since I was a child I could recall people labeling this day to be a very unlucky day. My curiosity grows as I grew older and I was able to gather a lot of answers, especially with the help of our friend "Google".

Here are some Theories and Facts about Friday the 13th: 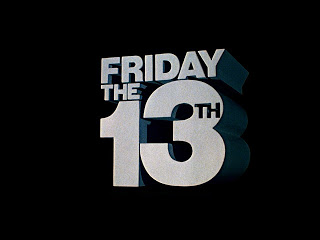 Fascinatingly, there is a term for the fear of Friday the 13th. It is called friggatriskaidekaphobia - "Frigg" is the Norse goddess whom Friday is named after and "triskaidekaphobia" means the fear of "13". It's also known as paraskevidekatriaphobia, partly from the Greek word Friday. It is a real fear - some people who have this disorder are even too afraid to say the words “Friday the 13th”.

Some say that the concepts of Friday and the number 13 as being an unlucky are linked to the Bible. For example, Judas Iscariot, the apostle who betrayed Jesus, has been labelled as ""the 13th guest" at the Last Supper.

Events that supposedly occurred on a Friday include the great flood during the time of Noah, the confusion of languages at the Tower of Babel, the day Eve tempted Adam with the apple, and the day Jesus Christ died. On Friday 13, October 1307, a warrant was issued for the Knights Templars to be arrested. Masses of Templars were tortured or executed by burning at the stake.

The superstition surrounding Friday 13 could also be linked to Norse mythology. According to legend, 12 gods were at a banquet at Valhalla when Loke, the demi god of mischief who was not invited, turned up, bringing the total number of guests to 13. He was responsible for the chaos that led to the death of one of the good gods – Balder – so all the gods grieved.

Some people believe that the number 13 and black cats, which are associated with Friday 13, are symbols of femininity. Friday the 13th has been commercialized by Hollywood movies such as American cult horror film “Friday the 13th” and its sequels. An image of a hockey mask is often associated with the film.

Interesting right? Personally, I don't believe in this superstition, because life is what we make it. I mean yes we could set this as guide for us to be more cautious but aside from that, this shouldn't stop us from doing what we needed to do. Like today, I went out to have my prenatal check up although some are telling me not to go out because it's bad luck. But hey, I'm alive and kicking!

Oh and yes I almost forgot about "Peeping Tom" that is what I call this guy, one of the maintenance staff where we live. This guy cleans the whole building everyday, including the hallway in front of our Unit.I have caught him several times peeping on the screen door whenever he's cleaning. But I just ignored it because maybe it wasn't intentional instead I just close the door. But recently, we changed our curtain and it was kinda thin where we could be seen from the outside. And during that time when I became paranoid as if someones peeping on us. One time I saw him cleaning, I was in the living room using the computer. I noticed him peeping, as in he was even putting his head against the glass window, but I didn't look back I was just looking from the mirror. I was freaked out, since it was just me and kids so I didn't approached him and just waited for him to leave. I told J about it that night. And earlier today, I woke up to the slamming of the door and J talking in a mad and loud manner. Guess what, he also caught "Peeping Tom" looking through the window, maybe he didn't notice J because he was looking directly into the open room where I was sleeping. Busted! We then called the Property Management Office and reported the incident. Isn't it scary? But good thing we caught him in the act, so he wont have any excuse at all. I just hope this doesn't happen anymore or assign someone else to clean the building. We just don't know what this man is capable of, right? I've been hearing a lot of horrible things in the news which really scares me. By the way according to other Unit owner they also caught the same guy peeping through the window in one of the units on the same floor where we live. This is a serious thing to be ignored.
at September 13, 2013
Email ThisBlogThis!Share to TwitterShare to FacebookShare to Pinterest
Labels: ShesTheMom