7 years ago when I was 7 months pregnant with our eldest, I got really sick. My OB's diagnosis was UTI so she prescribed medicines and sent me home to rest. Two days after, I still wasn't feeling any better in fact I was feeling even more sick, severe headache, fever was still there, my cough and colds was giving me a hard time breathing and I was feeling really weak. And that's when we decided to rush to the emergency room where I was admitted right away. We were all worried especially for the baby inside me, because if I don't get better I might give birth prematurely. A machine was attached to me to closely monitor my baby.  Several laboratory tests were also done until we found out the culprit. My IgM test came back positive for dengue fever! It was a scary news, but I was relieved to learn that it wasn't the hemorrhagic fever which is considered as the severe one. We stayed for a couple more days in the hospital until I was feeling all better. I just then visited my OB frequently to monitor my baby. Thank God everything went well and I was able to deliver my baby healthy and full term. 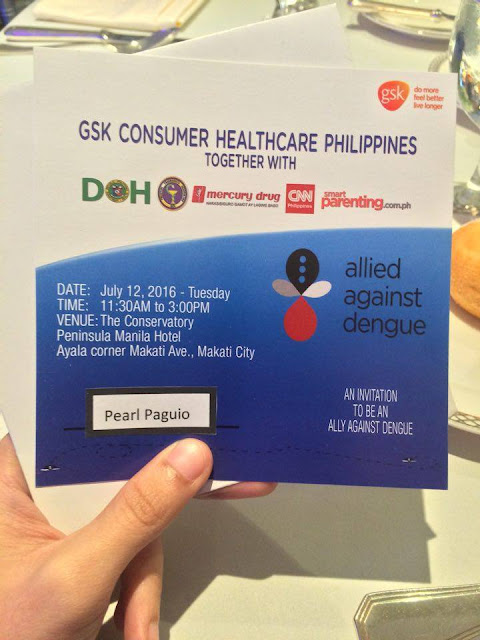 It was my first personal and scary encounter with dengue, I can't imagine the pain and fear I've been through. Despite being a Nurse who is knowledgeable about the disease and was able to care for dengue patients before, experiencing dengue personally was a totally different thing. I am hoping that no one else in my family gets to experience it too so I'm doing my best in order to prevent it. That is why I'm glad that I was invited to become an Ally against dengue and got to attend the launching of the Allied Against Dengue Movement last July 12, 2016.


The Allied Against Dengue Movement was founded by GlaxoSmithKline Consumer Healthcare Philippines Inc. (GSKCH), united with Department of Health (DOH), Philippine Pharmacist Association Inc. (PPHA), Mercury Drug Corporation (MDC), Smartparenting.com.ph and CNN Philippines to create a non-profit open platform with the aim to empower healthcare providers, organizations and communities; and reduce the impact of dengue on the nation in a holistic manner from prevention and control to management.

Dengue infection is prevalent in the world and Southeast Asia is the Epicenter of dengue mosquito breeding due to its tropical climate. Here in the Philippines, the disease outbreak is spreading to more areas and impacting more lives. In 2015 there were 200, 415 reported dengue fever cases, a 60% increase over 2014 which had 121,000 cases. This year, the incidence rate even shot higher with cases escalating 33% in the first quarter compared to the same quarter last year.

The movement aims to lead change and create a bigger impact to society through collaborative partnerships with the DOH, private institutions, healthcare providers, media influencers, and community leaders to help bring down the incidence rate of and deaths caused by dengue fever. And with the deployment of a robust nationwide education campaign through multiple channels, Allied Against Dengue seeks to curb the incidence growth rate and ultimately, make a real difference to the lives of Filipino. The coalition strategy will include: 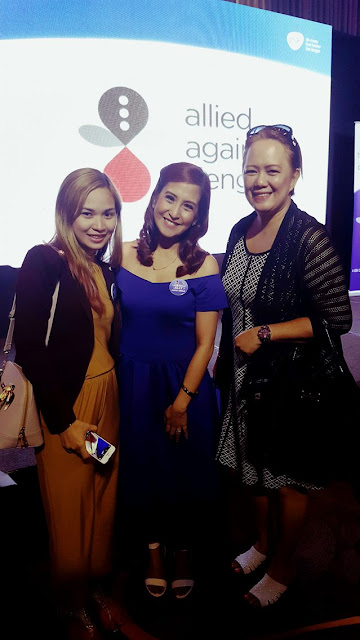 Through this Allied Against Dengue Movement I learned more about this dreaded disease and as a Proud Ally against dengue I pledged to do my part and share with you this learning.

1. What causes Dengue Fever?
2. What are the Characteristics of the Aedes Aegypti?
3. How many strains of Dengue virus are there?
4. How can we prevent Dengue?
5. What re the symptoms of Dengue?

6. What can we do at home?
7. What are the warning signs of Dengue?

There is no need for hospitalization unless you observe this warning signs then you must seek immidiate medical attention:
Now that we are equipped with the right information we can totally make a big difference and save not just ourselves but the people around us. I invite everyone to become Proud Allies Against Dengue, share this information to everyone you know and together lets defeat Dengue!

For more information on Allied Against Dengue and how to be an ally, contact GlaxoSmithKline Consumer Healthcare Philippines Inc. at 1800-14441-0884/ 1800-8908-8275 or email them at ph.customer-relations@gsk.com
at July 25, 2016
Email ThisBlogThis!Share to TwitterShare to FacebookShare to Pinterest
Labels: Health