The city government of Makati through its Museum and Cultural Affairs Office (MCAO) will be staging this year’s Kasuotang Pilipino fashion show on September 23 at 6pm at the Glorietta 2 Activity Center.

Makati Mayor Abby Binay expressed full support for the said event, which has become an annual event showcasing the creations of local designers to promote Filipino fashion representing the islands of Luzon, Visayas and Mindanao.

“We fully support the event as it offers an opportunity for the people, especially the youth, to have a better appreciation of Filipino fashion that denotes our rich cultural heritage. At the same time, it serves as a venue for Makati-based fashion designers to share their ingenuity and distinctive style and receive the recognition they deserve,” Binay said.

Meanwhile, MCAO head May Santillana in a statement said that it has become a tradition in the city to stage the event in line with the nationwide celebration of “Linggo ng Kasuotang Pilipino”.

“The staging of Kasuotang Pilipino has become a much-anticipated event in Makati every September. It features the beautiful creations of talented Makati-based designers worn and modeled by city officials, senior citizens, and friends from the international community and the private sector,” Santillana said. 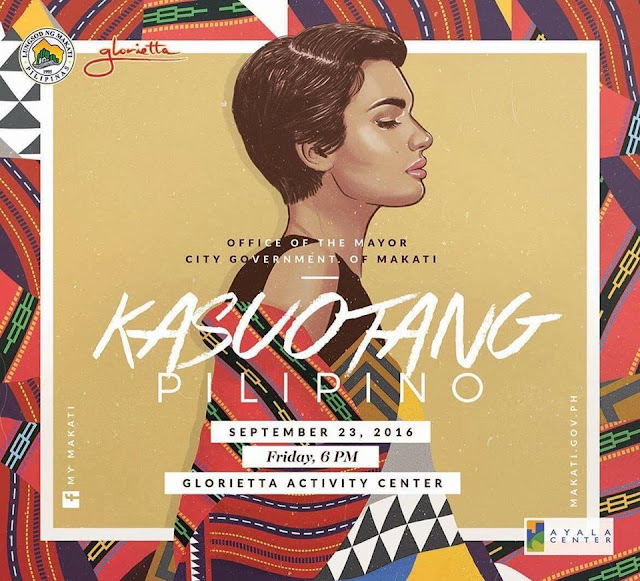 Kasuotang Pilipino is organized by MCAO, in collaboration with the Liga ng mga Barangay and Ayala Malls. Last year, some 12 Makati-based designers featured their signature styles at Kasuotang Pilipino through traditional costumes in Luzon, Visayas and Mindanao. In 2000, the first Kasuotang Pilipino Fashion Show was formally staged in Makati City, in line with Proclamation No. 241 that was signed by former president Fidel V. Ramos in 1993 mandating the observance of the “Linggo ng Kasuotang Pilipino” every September.
at September 22, 2016
Email ThisBlogThis!Share to TwitterShare to FacebookShare to Pinterest
Labels: Press Release