Some Days Are Better Than The Other

The past 4 days had been a great challenge to all Filipinos and it was brought by typhoon Maring. It caused massive flooding in many areas including Las Pinas, where we live. It's so saddening to hear news like people getting injured, properties ruined and what's worst some got killed. My heartfelt condolence to all families affected. In times like this, our faith is being tested, we may question Him as to why this happened. Nevertheless, it's up to us how we see adversities, it could either make or break us.

Moving on, although not as worst as it is, I and my family also had an unpleasant experience during the typhoon.

It started Sunday, it was just me and the kids J went to work early. Early evening my in laws arrived brought some stuff for us. (J and his family are originally from Tondo Manila, they have 2 houses there plus an apartment and it's just a few distance walk to Divisoria). They shopped and bought some for us.

I was able to take photos of the stuff and here they are: 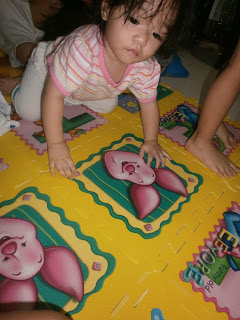 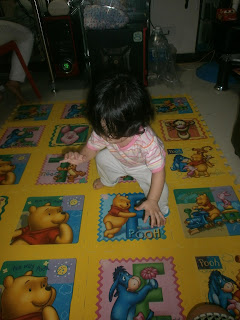 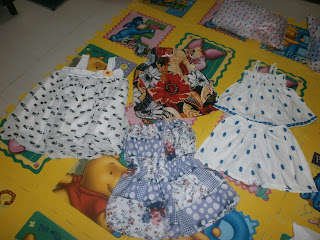 Dresses for Athena, only Php50 each 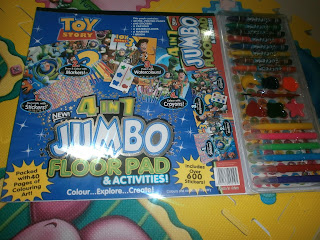 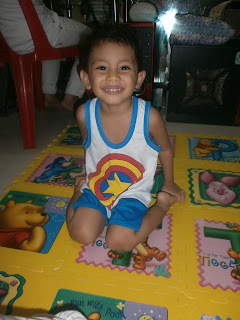 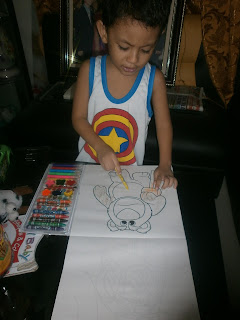 Kuya Tantan got excited he already wore the clothes and started to color! And a dress for me!

Later that night, J called and told me that it was raining hard so he might go home late. I wasn't really aware that it already started to rain, because me and the kids tend to stay indoors all day, our windows are covered with thick curtains and it's made of glass so we barely hear noises from the outside. By the way, J is commuting all the way from Mandaluyong to Las Pinas so his normal travel time is an hour and a half. But since it was raining he arrived late that night, it was around 10pm already. Glad he arrived safe and sound. So we then all went to sleep. But in the middle of the night we were awaken because the electricity went out, although it was raining it was still hot so we opened the window however the thunder's just too loud so we closed it again. Good thing the electricity went back.

Monday morning came, my in-laws left early for work but unexpectedly came back. Guess what, there's a massive flood outside. Our Unit is located on the second floor so I was able to see the situation around our place from our window. 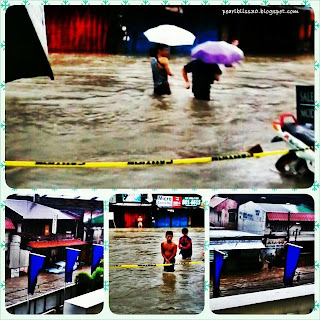 The street surrounding the Condominium.

So J didn't go to work as well and just called in to inform about the situation. Then again the power went out but this time it's for the whole day. Most of the time we slept, got nothing to do and we only had bread for lunch. Since there's no electricity we weren't able to cook, actually we could but we don't have a lighter or a match stick. Because we're used to rely on electricity for that. We weren't prepared at all for this. But before it got dark we decided to borrow a lighter from our neighbor. We then cooked the remaining stock of meat from our ref. That's our first meal of the day it was already 5pm. The electricity went back around 8 in the evening already, good thing because the kids could sleep well.

Tuesday morning J and my in laws again weren't able to go to work. Although the flood around us already subsided, when they reached the Coastal Road they were sent back home, because some areas are still not passable. So J and her sister just went to Market it was within walking distance to buy food. We had champorado for breakfast, macaroni soup for lunch and pork tocino for dinner.

Wednesday, it was still raining but not as hard as it was compared to the past days. No work since it's a holiday but not for J. But he was running late so he just went to work the second half and extended his shift. My in laws on the other hand were able to do some task that was left undone since they got stranded at home. As soon as they finished they went home and took Kuya Tantan with them, so it was just Me, baby Athena and my sis in law who's left at home. Where I was able to go online and do some of the things I used to do. Then when my in laws arrived they just brought home a meal for me and my sis in law. Oh what a relief, since for the past days we only had canned goods and foods that was easy to cook. 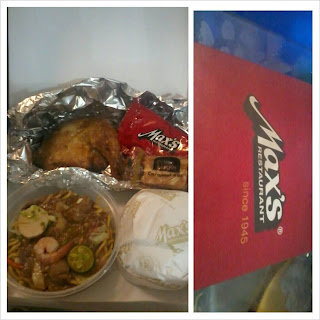 So that's what happened 4 days ago, and today so far so good. J and my in laws were able to go to work. It wasn't raining early this morning, but now it is again but not that hard. Indeed some days are better than the other, but that's okay because I'm with my family and that's what matters the most. Well right now all I'm hoping is for things to be alright. "There's a rainbow always after the rain" Can't wait to see Mr. Sun shining down on us and of course a colorful rainbow a start of new hope.

Keep safe everyone!
at August 22, 2013
Email ThisBlogThis!Share to TwitterShare to FacebookShare to Pinterest
Labels: ShesTheMom