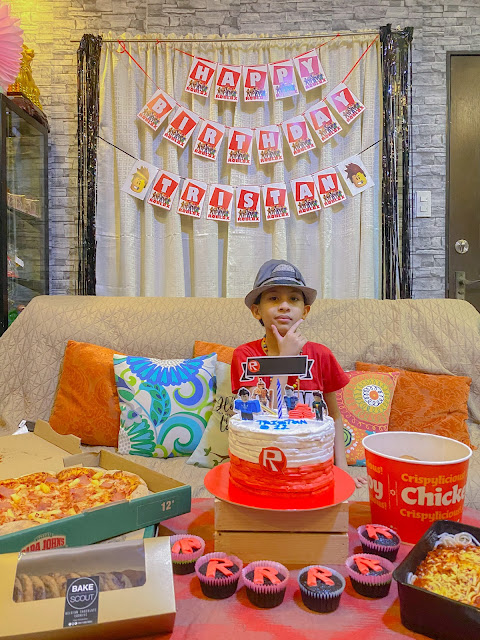 My other September baby just turned 11. Whaaattt??? I can't believe that two more years and my firstborn is officially turning into a teenager. Shucks. I know I've said this countless times, but really, where did the time go?
Tristan's birthday was last September 15, Tuesday, and it was their second day of distance learning. So we were all busy (and stressed hence the late posting), but we managed to have a simple celebration.
We granted all his requests. First, he wanted it to be Roblox themed. So a week prior, I already ordered a Roblox themed birthday banner. I also ordered Roblox Icing cake from the same bakery who made Athena's cake.
Second, the food. Since the kids have classes until past 2 PM, he wanted to have Amazing Aloha, fries, and sundae for his lunch break.
Third, for his birthday dinner, he wanted pizza, spaghetti, and Jollibee Chickenjoy. And lastly, chocolate chip cookies from Bake Scout, our current favorite!
He even blew his birthday candle twice and also made two wishes!
May all your wish come true!
Tristan is a very special boy. I know all kids are different. What I am trying to say is that he has ADHD or Attention Deficit Hyperactive Disorder. I haven't talked much about his condition because I prefer to keep things private at first, but I think in time, I'll share more about it. So having this condition, Tristan is hyperactive, super kulit and daldal, but he is smart and very malambing.
Yes, even at his age, he is still so sweet. He's good at expressing his feelings, says I love you a lot, but the typical tweenage attitude is already there. He doesn't want to take pictures that much, that's why you rarely see him in the photos I post. Also, he doesn't wanna be called by his nickname, Tantan, dapat Tristan na. And, pag nasa school he only wants to speak Tagalog kahit trying hard. Haha! 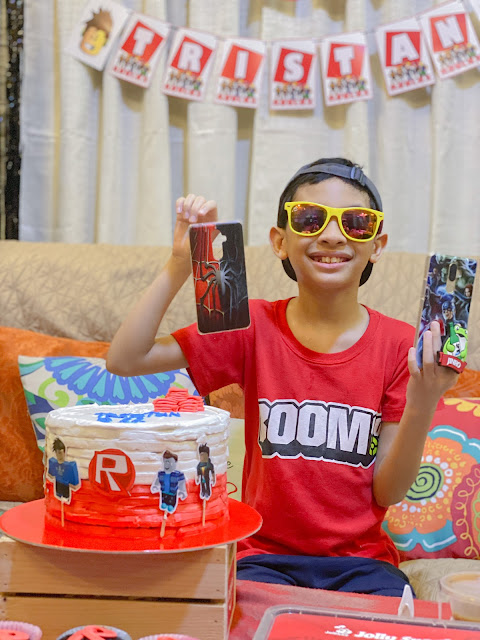 Even his preference for birthday gifts has changed. He used to request for toys, but now his request was for a phone case. I want it to be a Roblox design but I couldn't find one so I went for his next choice na lang which was Avengers. I ordered it online and good thing it arrived exactly on his birthday.
His other request was to unlock the chapters on his current game and to have Minecraft downloaded on his phone. The former was already granted but the latter is still pending. Kaloka their online class, until Saturday and ang dami lagi activities. So I'll download Minecraft probably next Sunday, para hindi sya madistract kase baka he's too excited to play all his games. I know, I'll get hugs and kisses again from him once I download it. He's affectionate like that.
I still can't believe that I already have a tweenager. Well, age is just a number, because he is still our one and only baby boy. I hope that he enjoyed and appreciated the simple celebration.
Belated  Happy birthday Kuya Tristan! I love you. <3
at October 01, 2020
Email ThisBlogThis!Share to TwitterShare to FacebookShare to Pinterest