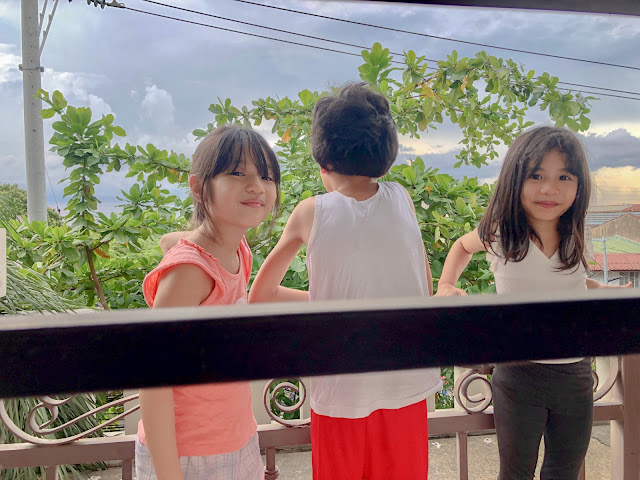 We're on a new month already, but still under coronavirus pandemic. I only have gone out of the house once to buy food. And, I think, I am not doing it again. Lol. As for the kids, I know they already miss going out. So last weekend, I finally, let them out...of our balcony, that is.
Yes, we do have a balcony connected to my in-laws' bedroom. I think we've only been there during our first few months here. Aside from the fact that the only way through it is in my in-laws' bedroom (though they are at work during day time), the sun shines directly to it, so it's really hot, especially in the afternoon. Also, the balcony is facing the highway, and we are only on the second floor, so it gets dusty. The balcony was left abandoned for that reason. Midway through the ECQ, I wanted to make use of the balcony, at least, for us to have a glimpse, and feel of the outdoors. But given my work schedule, in which I only have one rest day, and I work the night shift, I don't have the time, nor the energy to clean up the balcony.
Good thing, we had a long weekend from work. Since I work for a US-based company, we acknowledge US holidays. So July 3 and 4 (Friday and Saturday) were given to us as a holiday, plus my official rest day, which is Sunday. I believe that this is the longest break I had since I began working from home.
I want to make use of this time to do a lot of things, blog more, work on my campaigns, and a lot of personal stuff. But, I didn't get to do all of it. I'm still okay with it though because I got to sleep more, which is what I badly need, and I was able to spend more time with the kids. And finally, we went out to the balcony.
Friday (July 3, 2020) 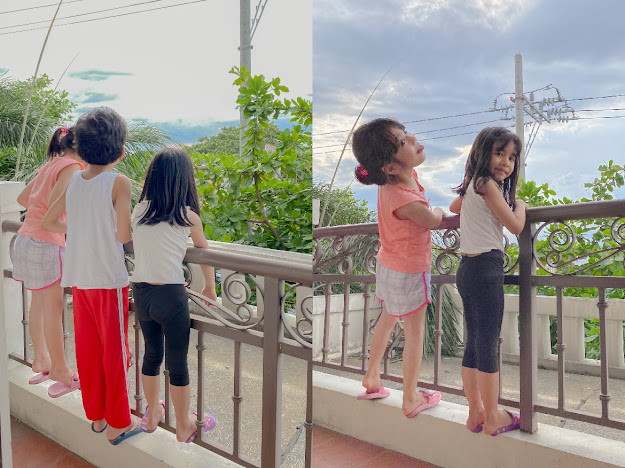 My last day at work that week was Thursday, which technically ends on Friday, 3AM. I slept long after my shift and then in the afternoon, I decided to clean the balcony a little bit. The kids were really happy. We just stayed there, observed the people outside, watch some flocks of birds flying, then watched the sunset.
Can you see that space in front of our balcony? It's such a sore eye! Apparently, the balconies on the first floor are wider compared to the upper units and originally, it doesn't have roofs. Perhaps, they complained as people from upper units such as us, could see them, so maybe, just maybe, they put on that roof. I was hoping that it was just a makeshift roof and that they'll replace it. But it's been like 7 years already and it's still the same. 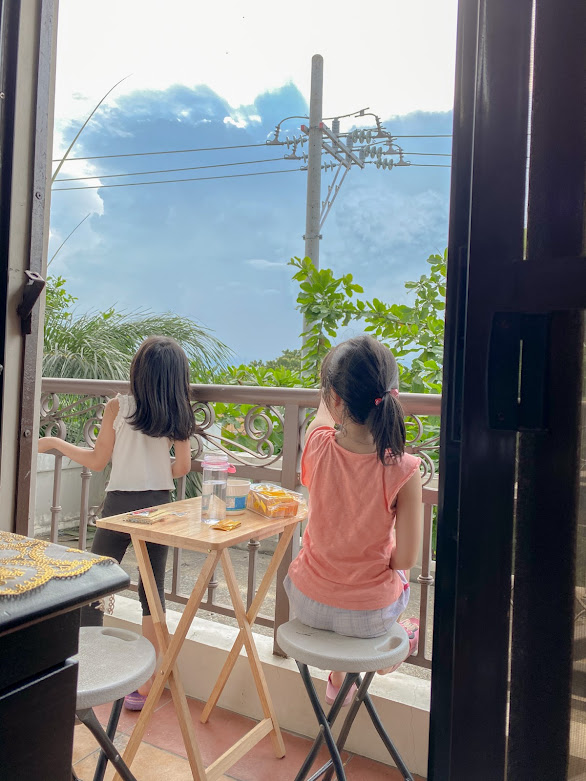 Athena and Brianna asked me to bring the table out as they wanted to have snacks at the balcony. They stayed there until night time, while I was cooking and only went inside the house when it was time for dinner.
Saturday (July 4, 2020)
The next day, Athena and Brianna said they miss swimming, so we just took the basin or batya down from the laundry area so they could take a dip. 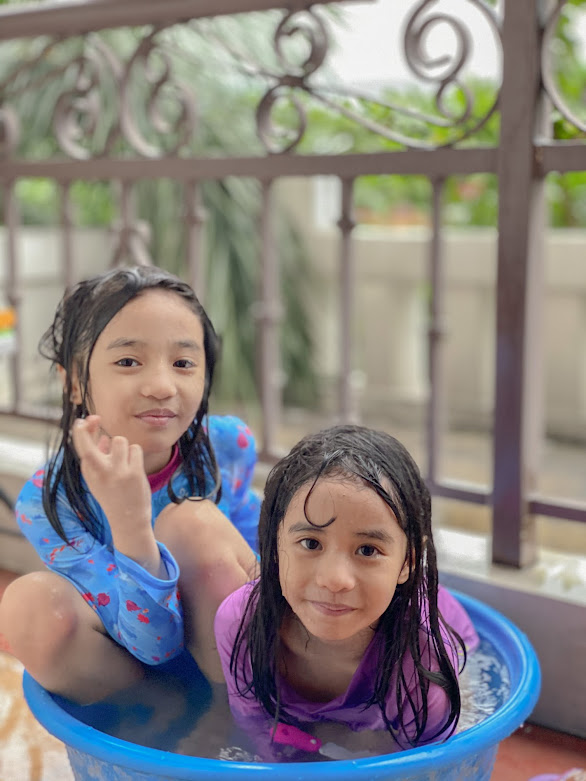 But this time, Kuya Tristan did not join them. He was busy playing games on his phone and said that the water was too cold. He is starting to have his own world. LOL. 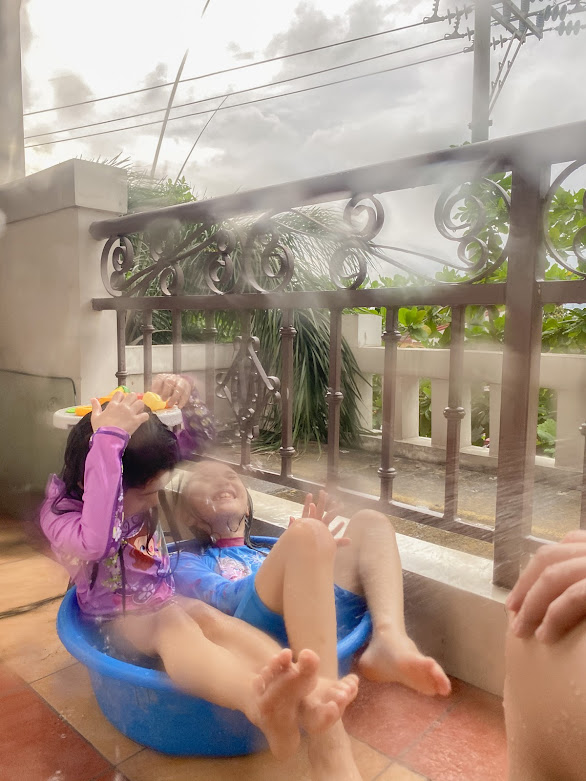 That's me splashing water on them. 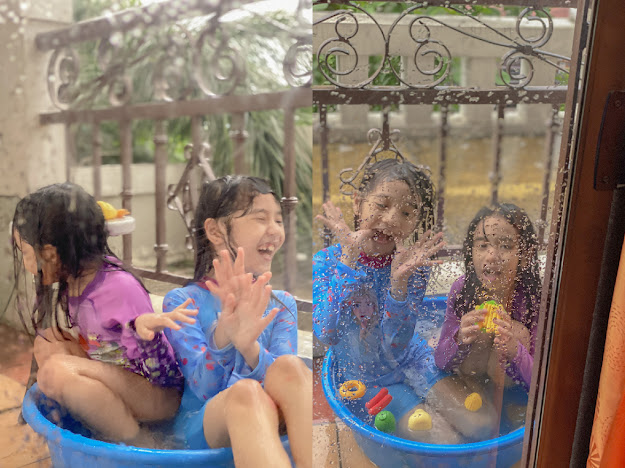 It's so much fun watching them having fun!
Sunday (July 5, 2020)
Sunday came, we organized the kids' clothes. We sorted out which clothes to keep and to give away. Shocks, a lot of their clothes don't fit them anymore. Of course, Brianna gets Athena's hand me downs. And, the clothes that don’t fit them anymore where given to their smaller and younger cousins.
During that long weekend we also had food delivery and watched movies. I can say that it was a really fun and productive weekend.
I also had a thought that excites me everytime I think about it. I want to turn our sad balcony into a mini balcony garden. Well, our balcony isn’t that big of a space, but it would really look good with plants in it. Also, planting could be a fun, learning activity for the kids, right? But I don't know what plants to grow in there that can survive direct sunlight. I am already doing my research though.  I hope to have another long weekend or break from work so I could start working on it. 😊
at July 10, 2020
Email ThisBlogThis!Share to TwitterShare to FacebookShare to Pinterest
Labels: family, Home, kids