A Great Tuesday It Is!

Happy Tuesday everyone! But for me it's not just Happy it's GREAT TUESDAY!!! Let me tell you why...so read on!


Exactly 1 week ago, 9th of July I was browsing on different blog posts and happened to drop by Mommy Practicality'sblog. Among all her posts, what caught my attention was her post about Cake suppliers just right in time because I was also scouting for themed cakes for my baby's 1st birthday. She featured several Themed cake suppliers and I did check on all of them. On that same day I added Delishaes CAkes facebook page and accepted my friend request right away. Right there and then I saw that they are hosting a giveaway of 30pcs. cupcakes with personalized topper, I hurriedly check what the mechanics are. 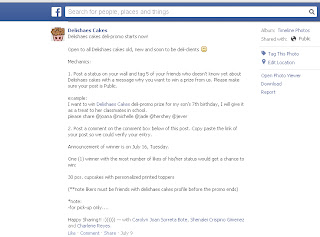 I was hesitant to join at first, since the contest requires the most number of LIKES plus those likers must also add Delishaes Cakes' facebook page. I wasn't confident enough that I could get more Likes, and the thought of asking the likers of my status to add the page might be too much. Because for some privacy reasons, they don't wanna add anyone that they don't know. I know it's just a page for cake supplies not an individual account which should be a Fan Page but hey of course they wont change that for the competitions sake. That's the rule so be it, and I tried my like and joined right away! It was a week long contest so we have enough time to gather support from friends. I know I was a bit annoying sending private message to almost all my Facebook Friends asking them for support by liking my status, this went on for a week. I even got my in-laws involved, asking for their friends help. It was kinda funny and desperate on my part, but who cares? I'm on the point where "I want this, i'll do what it takes to win it" haha.

But a day before the contest ends, since the posts of all other contestants are set in public, me and my husband was able to spy on their entry (lol). I kinda lost hope in winning seeing other contestant with more likes on their status than mine. But despite that, I still kept on asking support for those friends that are online.

It was almost midnight, the contest is about to end I wasn't expecting anything already I thought to myself "whatever happens, it was still a good experience" knowing I was able to gather that amount of likes (250) on my status, but as we know that isn't just the criteria for judging. So past midnight, I went to sleep. Woke up early the next morning because of Athena my alarm clock (my baby girl) and also husband's home from work. I went back to sleep as I was still sleepy and left Athena to my husband as he also went online. Then I woke up around 9am and asked him whether the winner was already announced on facebook, but it wasn't yet at that time. My mother in law even called us asking the same thing haha everyone is just excited, except me (i just don't wanna expect). An hour after, my husband went to sleep and I was washing Athena's feeding bottle again I received a call from my mom in law with a good news that the winner was already announced and it was me! Yay, as excited as can be, I hurriedly turned on the computer and logged in on facebook. Whew! Indeed I am the winner, can you believe it? Just when I am about to lose hope, good thing happens! Great Tuesday for me right? Now my baby has 30pcs. cupcakes for her birthday and I felt great! So great that I was inspired to create this blog..in details! hahaha :)And you know what else is great? It's like we had a celebration earlier as hubby bought spaghetti and pies (my favorite) from Jollibee for breaksfast.


By the way, I don't usually join in any contests/raffles I just don't have the luck. But lately i tried joining online giveaways/contests and it's been like 2 weeks already, and this is my 1st WIN and I could get use to this lol so I guess there will be more contests to join!


That's it, that's my Great tuesday kwento. Till next post. Ciao!!
at July 16, 2013
Email ThisBlogThis!Share to TwitterShare to FacebookShare to Pinterest
Labels: ShesTheMom