Situated on the North West Island of Luzon, with neighbouring provinces of Ilocos Sur, Benguet and Pangasinan and the West Philippine Sea, lies a progressive and developing province of La Union. La Union or “The Union” in Spanish holds a special spot in my heart as it is my hometown and growing up to this province I held witness to its captivating and promising beauty. 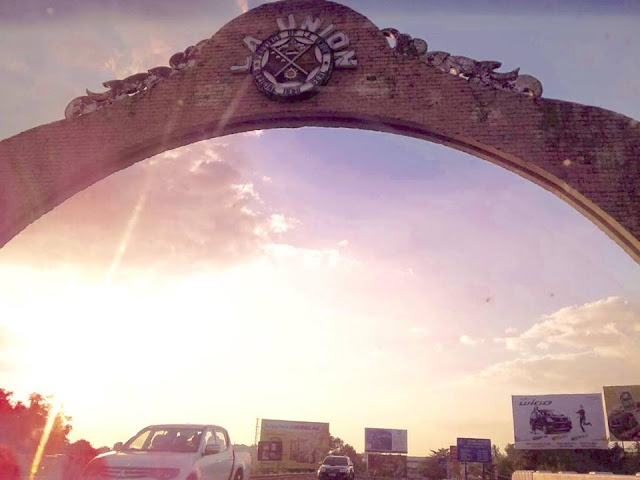 Carrying the slogan, “La Union: Where the mountains meet the sea” La Union is predominantly hilly and is surrounded by alluring beaches. Indeed you'll enjoy the best of both worlds. La Union, coined as ElYu (L.U for La Union) is also popularly known as the "Surfing Capital of the North". But more than just surfing and it's alluring beaches, La Union also has beautiful beachfront hotels, guesthouses, and inns, and a whole lot more to offer in its 19 municipalities and 1 city. And now I am very happy to know that its hidden wonders are starting to be discovered thus giving La Union the long overdue attention it deserves.

Easily accessible, just 5-7 hours drive away from Metro Manila, La Union can be traveled back and forth in just a day for a quick escape from the hustle and bustle of the Metro. But if you wish to explore more of La Union or just simply relax and unwind, spend at least 2 days or more. Given its booming tourism, a huge array of accommodations are available, ranging from a hostel to luxurious hotels, depending on your budget. It's necessary to book your accommodation ahead of time to save yourself from any hassle, the good thing is, you can do that online.

Planning a vacation to La Union anytime soon? Here are more tips that will surely come in handy for that. 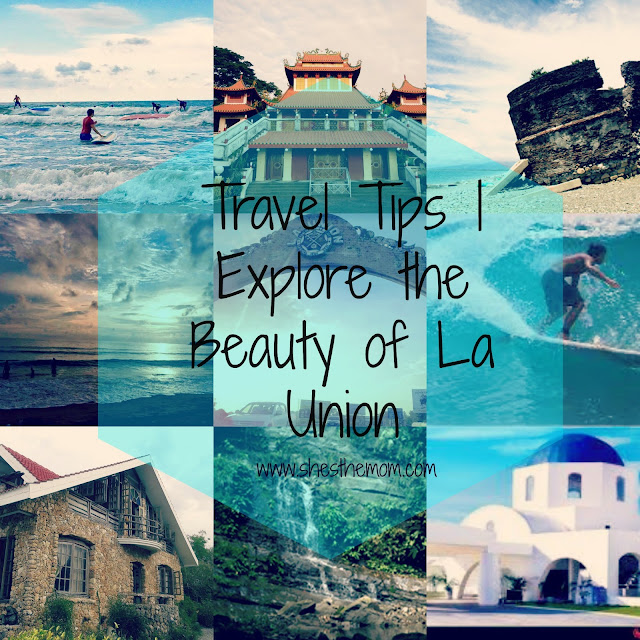 HOW TO GET TO LA UNION

You can board the bus going to Vigan, Laoag or Abra, as these buses will pass through La Union. There’s also a bus going to San Fernando only. Most of La Union's major municipalities are just along the highway like Rosario, Sto. Tomas, Agoo, Aringay, Caba, Bauang, San Fernando City- it's capital, San Juan, Bacnotan, Balaoan, Bangar, Sudipen, while other municipalities are accessible through minor roads of other towns like Bagulin, Tubao, Pugo, Burgos, Naguilian, San Gabriel and Luna. You can ask the conductor to drop you off to your destination.

Bus Terminals:
GETTING AROUND LA UNION

Tricycles are commonly used to access must-see places within towns. Jeepneys and mini-buses between towns with minimal fare are also common. Car or van rentals are also available.

WHAT TO SEE AND DO IN LA UNION 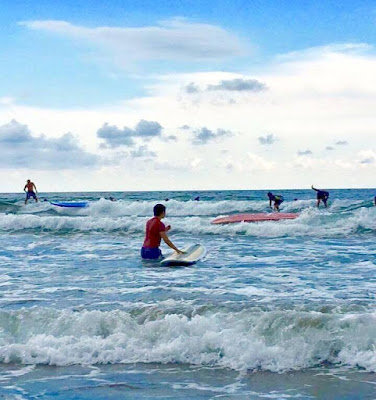 Large good quality waves bringing on a good swell, primarily in Urbiztondo, SanJuan isn't called "Surfing Capital of the North" for no reason. It's actually a shame that within 2 decades of living in La Union it was just last Summer of 2015 did I get to experience surfing for the first time. And I can't wait to come back for more!

Don't know how to surf? Fret not, surfing lessons are readily available along San Juan beach and it costs around Php400 for an hour, inclusive of board rental and instructor fee. Since its launch in 2006, La Union Surfing Break is now being held every month of October. Surfing break is a festivity that is flocked by tourists for surfing, music, food and entertainment.


If you are not into surfing then beach bumming, watching and photographing the sunset in La Union's alluring beaches is definitely a must do.

Trek and Cliff diving at Tangadan Falls in San Gabriel
I honestly haven't been here yet, where was I, 2 decades ago? LOL. But this overlooked but breathtaking attraction is perfect for adrenaline junkies. Get close to nature and enjoy its beauty as you go for an hour of trekking, then soak up in the refreshing water of Baroro river and go cliff diving if you dare!

Get adrenaline rush at Pugad in Pugo
Another one for the adrenaline junkies is the Pugad or Pugo Adventure. Get thrilled with their three ziplines, the longest and highest in Northern Philippines. Enjoy its breathtaking panoramic view of Pugo’s picturesque surroundings. ATV track and atower for rappelling and wall climbing is also available.

Take a dip at Tapuakan River in Pugo
A motorcycle road trip back in 2007 led us to Tapuakan river. Because of its pristine waters flowing from the mountain top towards the river mainstream, Tapuakan River has been awarded the Cleanest Inland River of the North. Along the river mainstream are giant boulders, engulfed into other rock formations. Entrance fee back then was Php10 there are cottages and changing areas available as well. Too bad we weren't able to back up our photos.

Get to know Ilocos heritage at Museo de Iloko in Agoo
Museo de Iloko is the old “presedencia” of Agoo. It houses artifacts and other pieces of cultural importance to the Ilocanos.

Get to know more about La Union at Museo de La Union in San Fernando
The museum showcases archeological finds in La Union which date back to Prehispanic Philippines.

Visit the Baluarte and Noble Stone House or Bahay na Bato in Luna
Luna is known for its beaches, particularly in Nalvo Sur and Darigayos- where our ancestral house is. Luna is also known for its pebbly beach, and along the stretch of pebbles rests the ruins of an old Spanish watch tower, locally named as Balauarte which stands still after more than three centuries.

Nearby is the Noble Stone House or Bahay na Bato, it's actually a rest-house- turned-tourist-site owned by a Baguio couple. The stone house features several stone sculptures by Korean artist Vong Kim.

Admire Occalong Falls in Luna
Another hidden beauty, occalong falls isn't that high compared to other falls but surely is worthy of a visit just to disconnect from the city and get close to nature.

Visit the Ma-cho Temple in San Fernando
The majestic Ma-cho Temple is a Taoist temple built by San Fernando City's substantial Chinese community in 1975 and is open to all worshipers and non-worshipers alike. This 11-tiered, multi-hued attraction stands on a more than one hectare of lot 70 feet above sea level and overlooking the sea. Housed in the Ma-cho Temple is Ma-cho's (Goddess of the Sea) 8 inch wooden image who is said to be the same with Our Lady of Caysasay who's wooden image was also found in Taal.

Be at peace with Nature at the hilly Botanical Garden in San Fernando
La Union Botanical Garden is home to a collection of Beautiful plants from the tropical Regions of the world. It showcases different garden themes like the serene Japanese setting, Friendship garden and more. Exotic birds like talking mynas and eagles, monkeys, iguana and other friendly animals are also put on display.

Chase 4 waterfalls at Arosip Ecotrail in Bacnotan
Located 440 meters above sea-level of barangay Arosip in Bacnotan, Arosip Ecotrail welcomes guests with cool shades of towering trees planted along the road which is equipped with a number of tire-paths, offering a dramatic panoramic view of lowland Bacnotan. Countless springs, looking like miniature waterfalls can be seen as you go on a 45-minute descending trek where 4 waterfalls await; Zim-sim- ug Twin Falls to the east which has an estimated height of 20 feet and a basin deep of eight to nine feet, going down southwest, after a 10-minute walk, lies Pad-tok Falls which has an estimated height of 22 feet and has a shallow basin because of the usually weak flow of water, The combined water of the falls all meet in one main waterfall called Tekdag-aso which is located west of the bedrock. Going down, lays the wide and enchanting secondary basin which is most perfect for swimming.

La Union is also home to some historic churches:

Basilica Minore of Our Lady of Charity in Agoo

Better known as Agoo Basilica, it's dedicated to Our Lady of Charity. It is the seat of the Santa Monica Parish of the Roman Catholic Diocese of San Fernando de La Union under the Vicariate of St. Francis Xavier (Vicar Forane Father Raul S. Panay).

Sts. Peter and Paul Church Bauang
It's one of the oldest church in the country which was founded in 1580 and was canonically finished on 25 April 1587 by the Augustinian missionaries.

Pindangan in the Ilocano dialect means a place where meat is sun dried with salt for preservation. Here you can see the buttresses and walls of the ruins of one of the oldest church which was built in the year 1764. Behind the ruins is the monastery of the Carmelite Sisters the caretakers of the glorious landmark.

Namacpacan Church in Luna
Also known as the Santa Catalina de Alejandria Church. Formerly called as Luna Church, The church was declared a National Cultural Treasure by the National Museum of the Philippines.

All these tourist attractions are easily accessible whether you will be staying in San Fernando City or San Juan.

WHERE TO EAT IN LA UNION

Some of La Union's specialty dishes are dinengdeng - a bagoong based vegetable stew, dinakdakan- an Ilokano food containing pork snout, pork ears and pig brain and is similar to sisig, pinapaitan- a soup dish mostly composed of cow or goat innards and a lot more. These are always available in small karinderya in every town of La Union. However, these days, a lot of resorts and restaurants have emerged offering more food choices for everyone.

Here are some of the must-try restaurants in La Union (particularly in San Fernando and San Juan):

Night Market in San Fernando
Every night some roads along San Fernando dry market are closed for this night market. Here you can see food stalls offering comfort foods and street foods. 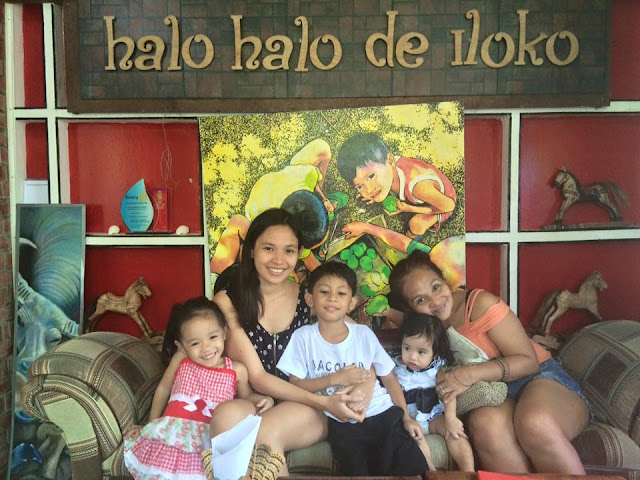 Thunderbird Resort
A piece of Santorini in San Fernando, Thunderbird offers pleasure and luxury. A resort and casino in one with choices of delectable dishes.

I'll be honest, some of the places or spots I mentioned above are fairly new to me since I moved to Manila in 2010. And for the past 2 decades of my stay in La Union my life mostly revolved around San Fernando City. Upon writing this, I realized that I missed out on a lot of things back then. So now La Union is definitely on my bucket list. Aside from visiting my parents there, I promised myself that I'll see more of La Union. So this post will be updated as soon as I check off all the things listed here.

Hope you find this post helpful and if you have any tips you want to add up on the list,please feel free to share.
at November 05, 2016
Email ThisBlogThis!Share to TwitterShare to FacebookShare to Pinterest
Labels: Travel and Experience